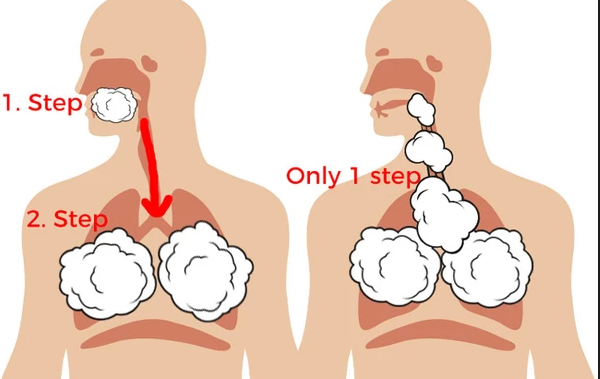 MTL (Mouth-to-Lung) vs DL (Direct Lung): What are the differences?

When people first get into vaping, they tend to get inundated with the variety of options with devices, eliquids, and styles of vaping. What tends to get overlooked is the method of vaping they should go for, especially when considering their previous experiences like smoking.

The terms MTL and DL vaping tend to get thrown around, with different devices being marketed as more ideal for either one of them. If you’re not familiar with what they are, then here’s a basic guide on the difference between mouth-to-lung and direct lung vaping.

This is the method most smokers are accustomed to. As the name suggests, mouth-to-lung inhaling has you take in the vapor into your mouth and holding it there first, then inhaling what's in your mouth into your lungs, and then exhaling.

This method lets you taste the vapor as much as possible before you take it into your lungs. It's a more deliberate method, which most tobacco smokers should be familiar with.

You take a smooth and steady drag into the mouth and hold it in for a second or two before proceeding to inhale into the lungs before exhaling. With vapes, you take a longer drag than what you're used to with cigarettes.

MTL vapers tend to gravitate towards eliquids with high propylene glycol (PG) ratio. PG eliquids give a more satisfactory throat hit and is good for devices designed for MTL vaping. Eliquids with 50:50 VG:PG ratio is seen as ideal.

Direct lung inhaling, also known as straight-to-lung inhaling, is just like taking a deep breath, but the only difference is you're pursing your lips as you draw from the vape.

It's a more natural method that doesn't take much practice to master, but most beginners may find it daunting as they would think they'll cough immediately afterward. This method is less practiced by tobacco smokers due to this reason.

This is done best with devices that have adjustable or fully open airflow. DL vaping is more airy and requires you to take a long, smooth, and steady draw into the lungs, as if you're breathing.

DL vapers tend to prefer eliquids with a higher vegetable glycerin (VG) ratio as it gives a smoother vape with thicker vapor and much less throat hit. Eliquids with 70:30 or even 80:20 VG:PG ratio are ideal for DTL.

Which Should You Go For?

For most new vapers, MTL inhaling is what they're comfortable with at the start. Vape devices with tighter draw and eliquids with higher nicotine levels are made for MTL vaping, and many enjoy the throat hit that comes with it.

Former smokers tend to go for MTL as they're familiar with it from tobacco smoking. DL inhaling is a lot more intense, so beginners may find that it makes them cough.

MTL vaping generally lets you savor the flavor of your eliquid since you hold the vapor in your mouth first. It also adds less air to the vapor, thus maintaining the intensity of flavor.

DL vaping is better for people who cloud chase—blowing big clouds of vapor. It also opens the door to more intense vaping experiences. A lot of vapers who start out with MTL then move on to DL vaping as they continue their vaping journey.

However, there's nothing wrong with sticking with MTL vaping. Whichever method you stick with depends on what in particular you enjoy about vaping. What's important is you find out what you like best and get the most out of it. Source: caferacervape.com